What is ESOF up to?

ESOF 2022 in Toulouse!
We arrived in Toulouse the day after the opening concert so we did not have the opportunity to listen to the festivals host Orchestra Symphonique Étudiant de Toulouse, but in the following days we were able to listen and enjoy several interesting concerts. Including Orquesta Académica da Universidade de Coimbra who presented a program with music from their native Portugal. At the same concert L'Orchestre Universitare de Strasbourg, the host orchestra for the 2018 ESOF festival, participated with Rachmaninov's Symphonic Dances with three!!! conductors (though not at the same time on the rostrum :)). At another concert Universiteit van Amsterdam Orkest J.Pzn Sweelinck performed Beethoven Symphony No. 5 and Het Universitair Symfonisch Orkest van de KU Leuven with their compatriot Cesar Frank's Symphony in D minor. 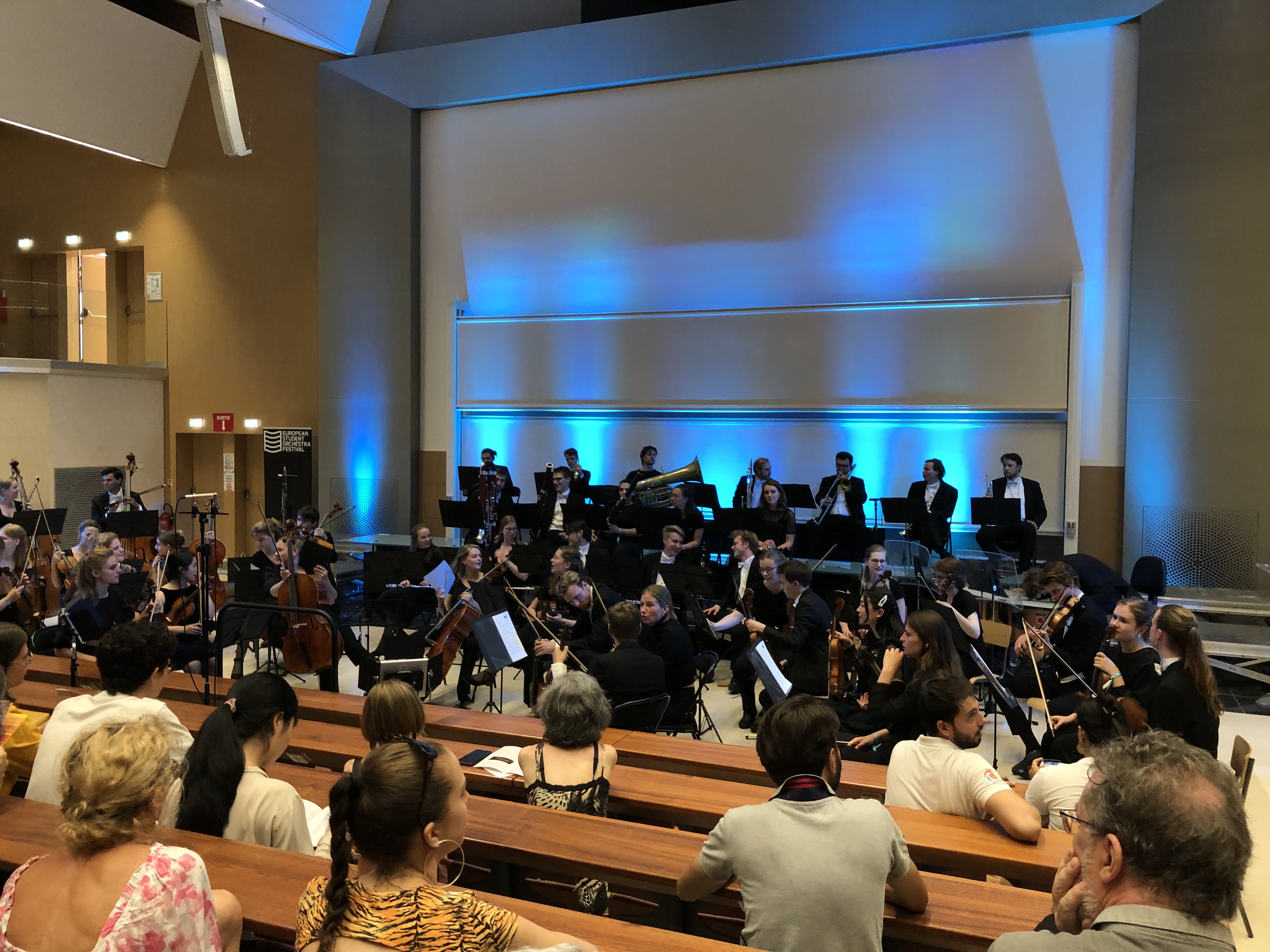 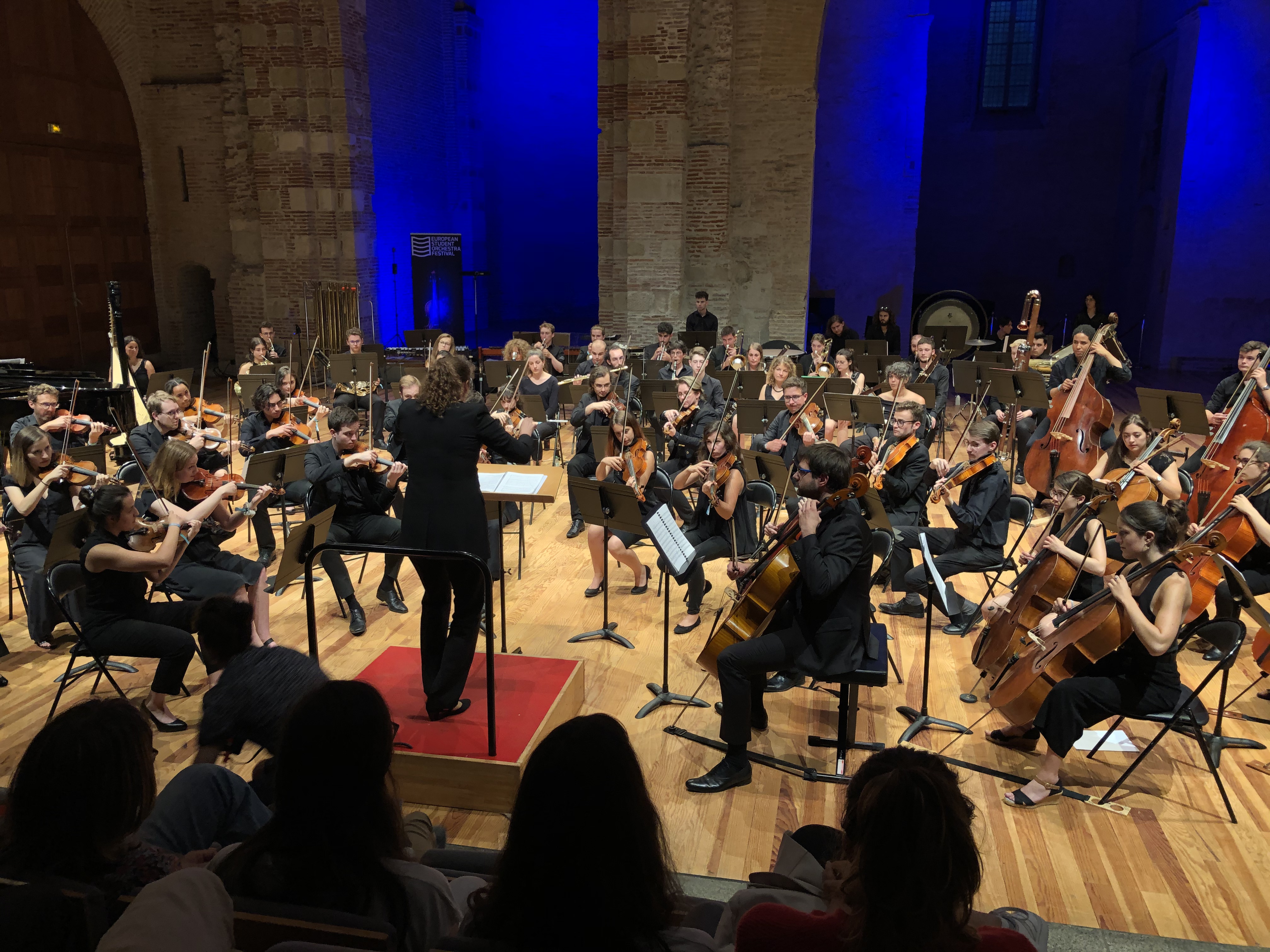 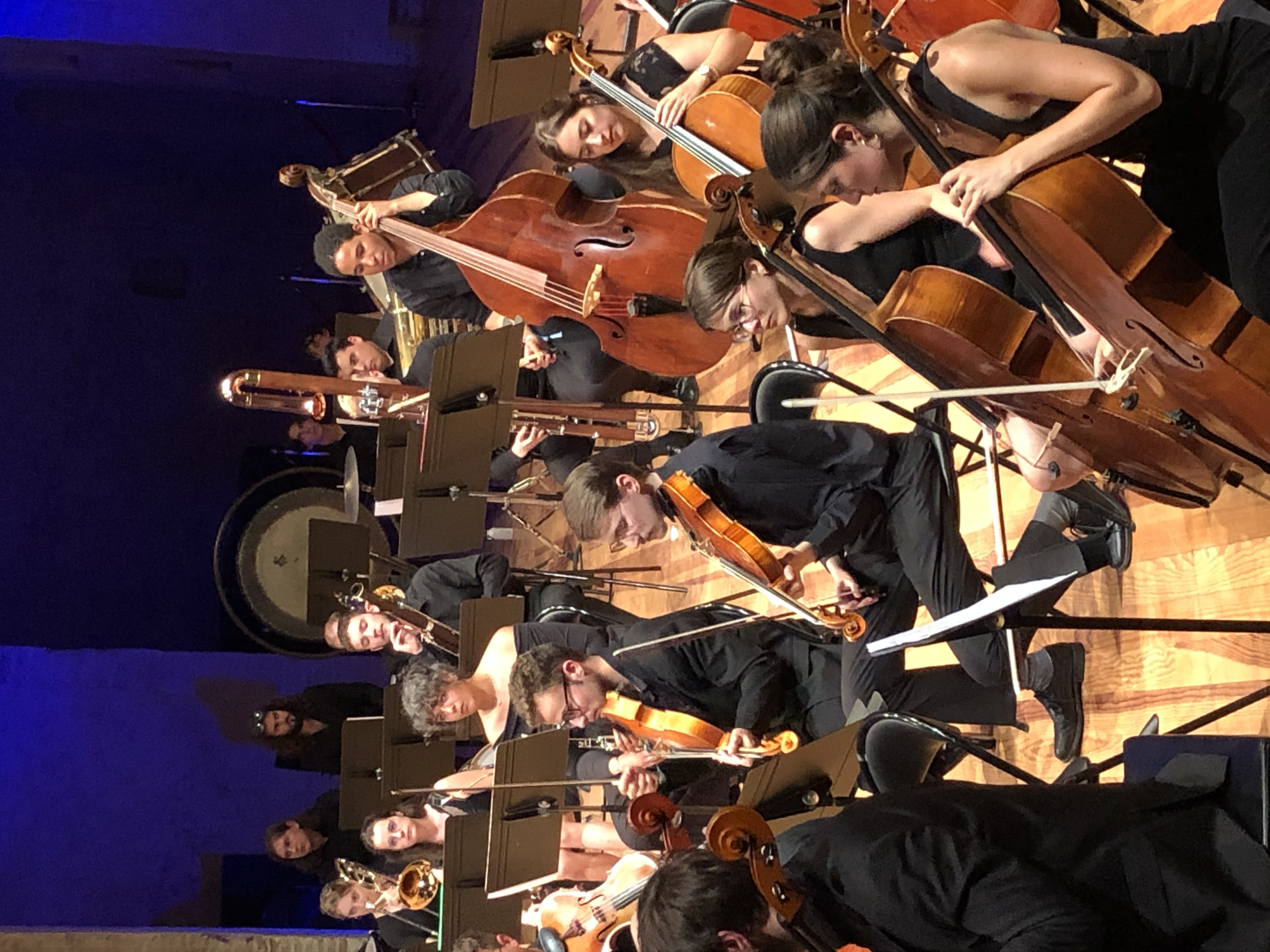 After being used to every event on the horizon getting canceled because of the Covid pandemic, the European Student Orchestra Festival (ESOF) was filled with excited musicians who have waited for a very long time to be able to play together again. The 2022 edition of ESOF was held in Toulouse and had participating orchestras from France, Portugal, Switzerland, Germany, The Netherlands and Belgium. During the festival the participating orchestras performed all over Toulouse with their own repertoire, and on the festival’s final evening a few musicians from each participating orchestra played together in a new ensemble called the European Student Orchestra (ESO), which was conducted by Simon Proust. 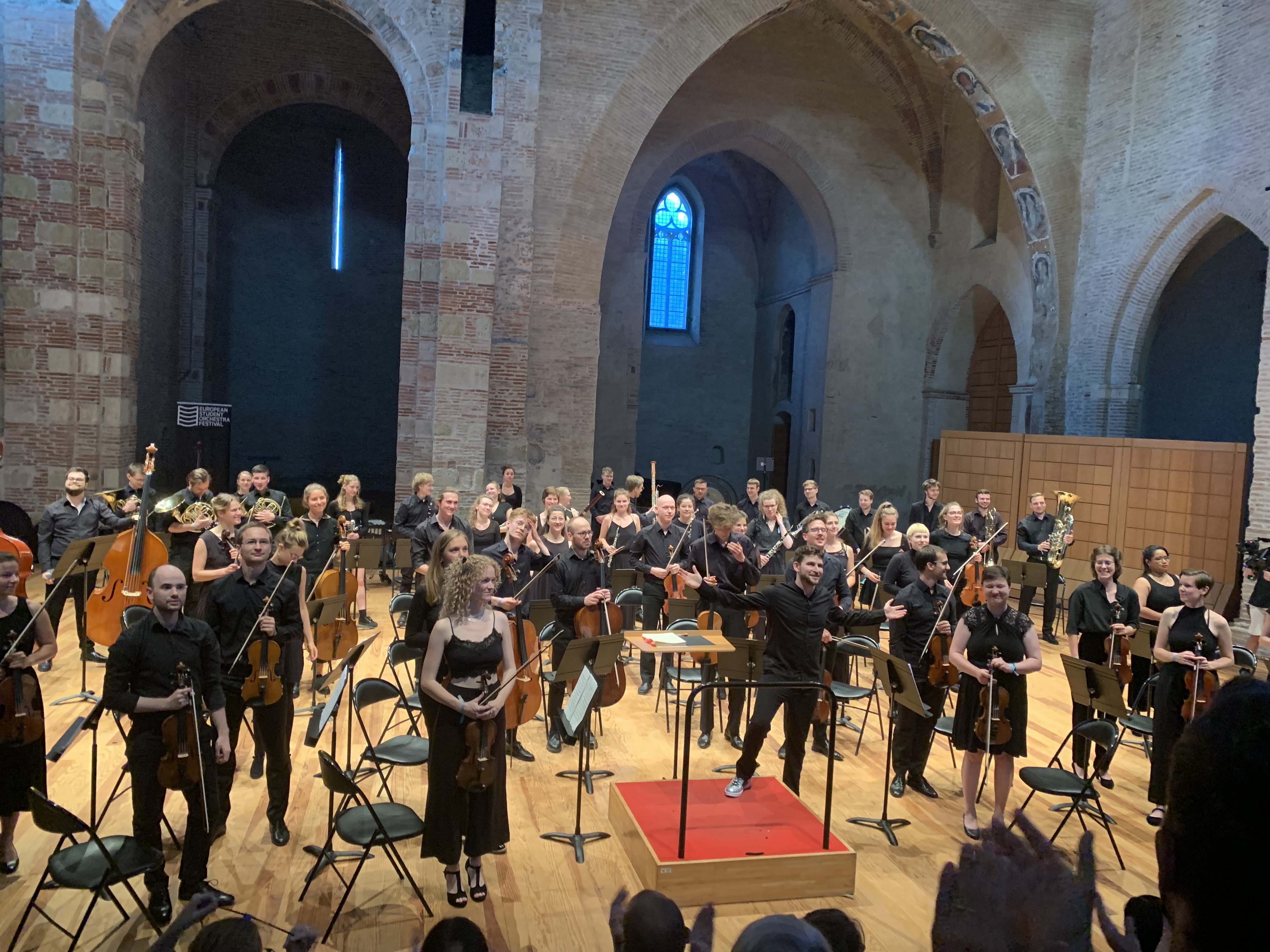 After having walked a full day in 30 degree heat it felt incredible to walk into the Saint-Pierre Des Cuisines, a church which is now used for concerts and events, to listen to the Leipziger Universitätsorchester (LUO) from Germany and the Aarauer Studentorchester (Astor) from Switzerland. The programme was varied and exciting, containing everything from Amy Beach’s Gaelic Symphony to Bernstein’s Candide overture and Brahms’ Hungarian Dance Nr. 2. The Astor orchestra also consists of a choir which they brought out for a romantic encore that conductor Ramin Abbassi said was a piece meant “for the heart”. 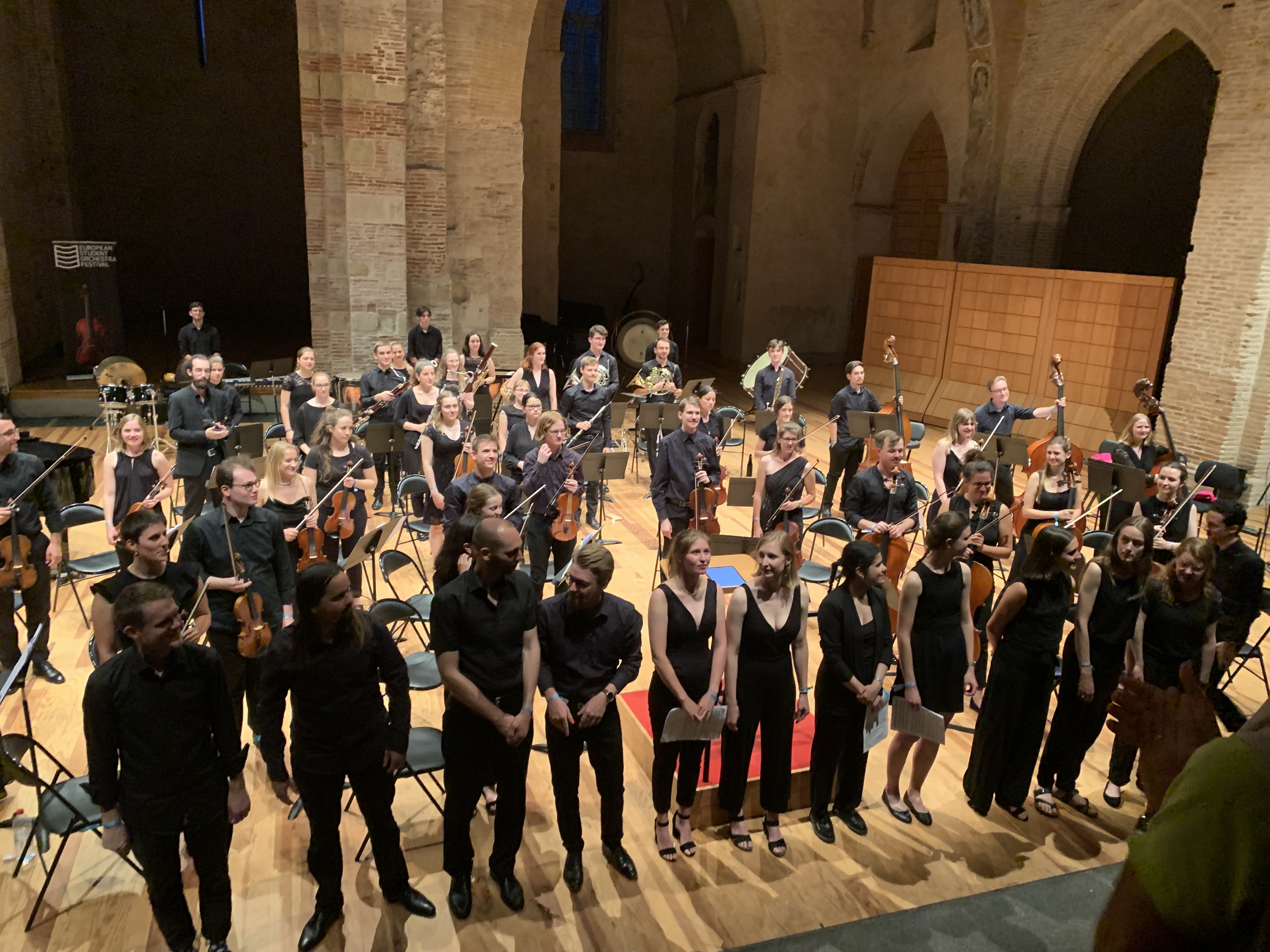 During the final concert with the European Student Orchestra the energy was high and both the musicians and audience kept cheering each other on, especially since all of the participating orchestras were sitting in different sections and getting excited whenever their orchestra's name was mentioned on stage. After the energetic introduction of the participating orchestras the concert began with the Ukrainian national anthem, with the message that no matter what country you come from, music has the power to unite. The program continued with the fanfare from La Péri and L’apprenti Sorcier by Paul Dukas. The evening continued with the Intermezzo de Manon Lescaut by Giacomo Puccini and a more modern piece by Karol Beffa, who was present in the audience during the concert. The last piece and finale was Boléro by Maurice Ravel, which the orchestra got to play three times as an encore when the audience couldn’t accept that the evening was coming to a close! All in all you couldn’t ask for a better way to finish off a great week with incredible musicians from all over Europe gathering in one place to play music together in the spirit of peace and love of music.

ESOF 2022 in Toulouse!
After a forced break during the pandemic, we are back with a new festival, this time in Toulouse, from 30/06/2022 to 03/07/2022! This edition will be held in close collaboration with the Orchestre Symphonique Étudiant de Toulouse and the City of Toulouse. We are delighted to see the continuation of the festival in different European countries.

From 30/06/2022 to 03/07/2022, up to nine student orchestras will gather in Toulouse, France to participate in the fifth symphonic edition of this Festival.

For four days you rehearse, perform, dance, party together with like-minded students. For four days you will get the chance to eat, breathe and live classical music. Toulouse will be the stage of this exciting week. When not rehearsing or listening to a concert, you will have more than enough time to discover Toulouse, learn about the city history and experience its famous night-life.

The European Student Orchestra Festival (or ESOF) unites student symphony orchestras from all over Europe. The first three editions took place in Leuven (2012, 2015, 2017) and were a great success with participants from all over Europe. Last year ESOF went abroad for the very first time and had a fantastic fourth edition in Strasbourg. Future projects will include more festivals as well as new initiatives. Find out more on their website http://www.esofestival.com/.

ESOF works closely with the Orchestre Universitaire de Strasbourg, the European Network of University Orchestras, the Tallinn University Symphony Orchestra and the Universiteit van Amsterdam Sweelinckorkest, with whom ESOF has entered into an official partnership called "MUSE - Music at Universities for Students in Europe" under the European Commission's Creative Europe programme.